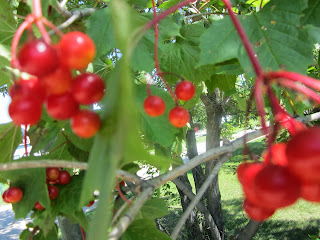 Fall is such a beautiful season full of colors and wonderful smells from the kitchen. The theme for the Canadian Food Project, preserving is full of wonderful memories of a Country Kitchen during the harvest season. 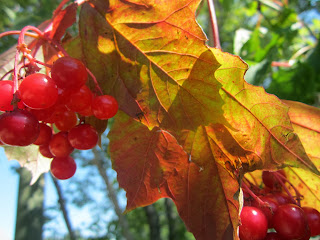 The Country Kitchen had a strip counter and a sink with a hand pump at the side.  Water was pumped from a cistern for clean up. Drinking water was hauled from a well. The kitchen table was the centre of all the preparation of the food, much like the island of todays’ kitchens.   Preserving of vegetables was a necessity as Northern Rural Manitoba was only fully electrified by the end of the 60th. I do remember the ice house that was in a shaded area in the woods next to the house.  Ice was hauled from the frozen river in the early spring and covered with sawdust.  A wood stove was a source of heat and food preparation.

Fall was such a busy season with the beginning of a school year for the children and the harvest on the farm. Yes, I remember the threshing machine during harvest on our farm.  The stooks on the fields, the hay racks and the thresher in full gear.  How lunches were brought to the fields for the men, sandwiches made from freshly baked bread, piping hot soup in pots and coffee in mason jars. Large slices of fruit pie finished the meals.


At the same time the garden was also ready for harvest.  Tomatoes, beans, corn and beets were canned along with a vegetable mixture for soups. Jars of a variety of pickles, dill cucumbers, dill carrots and even dill turnips.  Jars of relishes, Chow Chow, Chili Sauce  (similar to today's Salsa without the hot peppers), Horseradish and Beet Pickles, Bread and Butter pickles, Ice Water Pickles, 14 day pickles, and my favorite Giardinere pickles ( a mixture of cauliflower, red pepper, celery and silver-skin onions).  The variety of pickles depend on how many cucumbers one had from that year's garden.

Favorite recipes of preserving were eagerly shared among the rural folk.  I have found in my mom’s recipes, pieces of paper with hand written recipes from different friends or relatives.

To this list, my mom would also preserve BC fruit when in season, pears, plums, apricots and peaches.  Whole Crabapples with their stems were canned with whole cloves.  My father preferred a bowl of canned fruit to any dessert.

Jars of jelly and jam also filled her root cellar. Jars of Raspberry Jelly, Crabapple Jelly, Plum Jam and Rhubarb and Strawberry Jam, all from her garden. One of my grandmother favorite recipe for making Rhubarb Jam is found in the Joy Of Cooking CookBook named Spiced Rhubarb Conserve but minus the cinnamon hearts. This recipe is very similar to Chutney with spices but without the onions or garlic.

The large number of cabbage picked were made into sauerkraut in a large clay crock with a circular rock that fitted the top of the crock.  Leaves for cabbage rolls were also fermented in the same crock.  To this list, one must think of the storage of potatoes, carrots and beets.

How can one not marvel at this list of accomplishments.  The garden not only had to be dug, but the vegetables washed and readied for canning, along with the washing and the sterilization of all the jars and glass lids. Glass lids with rubber rings were the normal at this time.  Although, this was such a busy time, it was such a happy time as one benefited from that year's crops!

This long list of preserving was along side other tasks such as  preparing meals for the the threshers, along with other farm duties like milking cows.  Yes, not to mention, most farm women had children to care for, along with hauling  threshed grain to the elevator or running to get a broken part for the machinery.

The country kitchen was filled with smells of freshly baked pies and loafs of bread for the Threshers’ meals along with steam from the canning.  Cleaned 2 quart jars and quart jars were lined up to be sterilized with hot boiling water and filled.  Baskets of washed vegetables waited to be preserved along with stalks of fresh dill. Garlic and Onions were spread out on the veranda drying out in the sun.  Some of the garlic will be replanted in the fall for harvest  the next summer.

As a young wife, I did take up preserving with great zest, canning BC fruits, making jellies and jams along with a variety pickles. 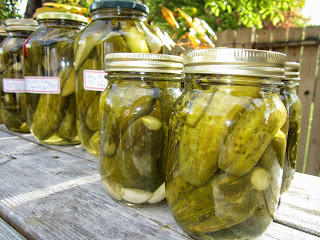 Experimenting with my mom’s recipe as her bountiful garden supplied fresh vegetables for me and others.  I remember making Zucchini Jelly using a jello package, a recipe that was passed around in my circle of friends but had to be kept in a refrigerator as the gelatin in the jello would dry up if not refrigerated. Yes, this did happen to me!

My relishes which I was so pleased with, where not something my city born husband “relished” and much to my disappointment preferred the green dye Heinz Sweet Relish!

Recently I have began canning but my supplies comes from a local farm’s market where most of the fruit and peppers come from the Osoyoos area in BC and the vegetables from Saskatoon Farm outside of Calgary.   Certainly my supply is more manageable than the bountiful garden of my Mom’s.  Although one of the beauties of living in a rural area is that the over supply from one’s garden is generously shared with others who may not have a bumper crop in something.

One of the main changes in preserving in the last decade is in not using paraffin wax as a seal for jellies or jams after the hot mixture is poured into the jars.  Jellies and jams are now preserved in a water bath by boiling the jars  with the jelly or jam for 10 to 15 minutes.

Even pickles are recommended to be water bathed.  However, I have stored a lot of my pickles in the refrigerator without processing them in a water bath. Yes, my refrigerator gets very full in the fall.  I do a variety of dill pickles, such as dill carrots, dill beans and dill cucumbers.  The green beans are from my garden as I plant Scarlet Runner Beans. My favorite pickle is an assortment of hot peppers as they vary in color.   So pretty to look at and make a lovely gift. Pickled beets with robust spice like Star Anise is a winter treat with  Roast Beef. 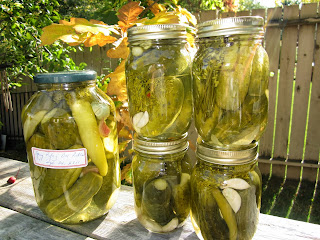 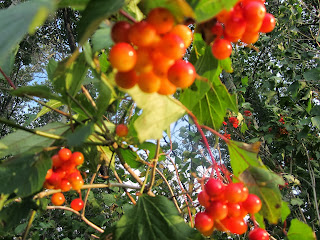 This year’s supply of this red berry with a flat pit awaits me in a deep freeze in Northern Manitoba.  My brother picked them before the Black Bears on the farm got to them! 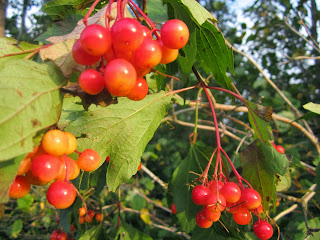 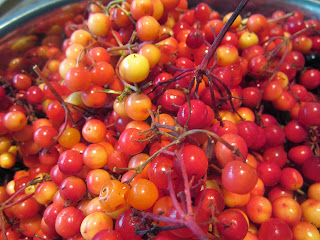 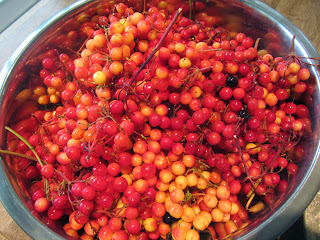 Although my father loved these berries canned whole in Quart Jars, I was surprised to see a blog on using these berries for High Bush Cranberry pie because of the small flat pit in the berry. 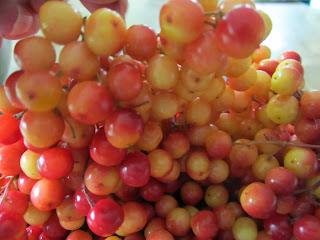 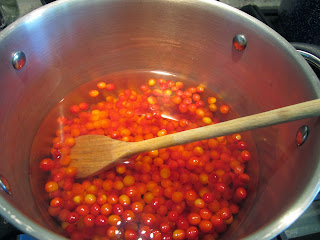 The recipe I used and followed is from the package of Certo as was recommended by an elderly woman in my home town.  She suggested that I follow the Sour Cherry recipe found in the Certo dry crystal package. I prefer the dry crystals to the liquid as you get more jars of jelly and I find it less messy to work with.   However, the two products are not interchangeable and recipes are specific to each product. 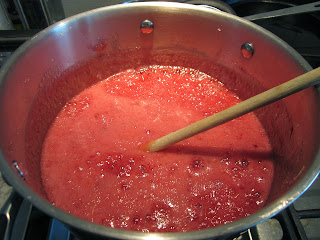