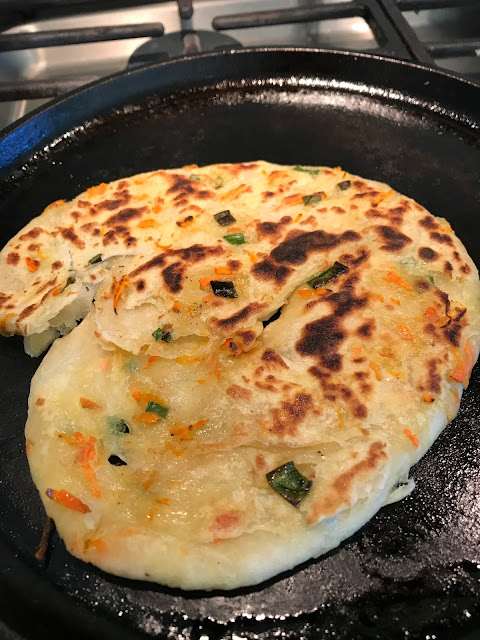 Yesterday, I decided to do Chinese Pancakes with my Granddaughter as she had loved the purchased ones her mom had bought for an Appetizer on Father's Day.  I cringed at the calorie count for these babies.

Perhaps there was a healthier version, but after looking  at the different videos and recipes, I don't think so!

The dough for these pancakes is basically flour, salt and water.  The dough is like pyrohy dough or flatbread.  The process of layering fat is very much like making Croissants or Salenjaci which I have blogged about.

This layered flatbread is called "Bing" in Chinese and comes from Northern China.  Check out this video of the pancakes made at a street vendor.  Chinese Green Onion Pancakes China Shanghai.

Ingredients:
2 c flour
1c hot water*
salt
Mix together, then knead, let rest for 30 minutes
*boiling water is used in most of the recipes, But I do think this recipe needed more water. I would use 1 1/4 to 1 1/2 cups so the dough is stickier/

Divide the dough into 4 portions
Roll the dough as thin as possible, then oil the dough 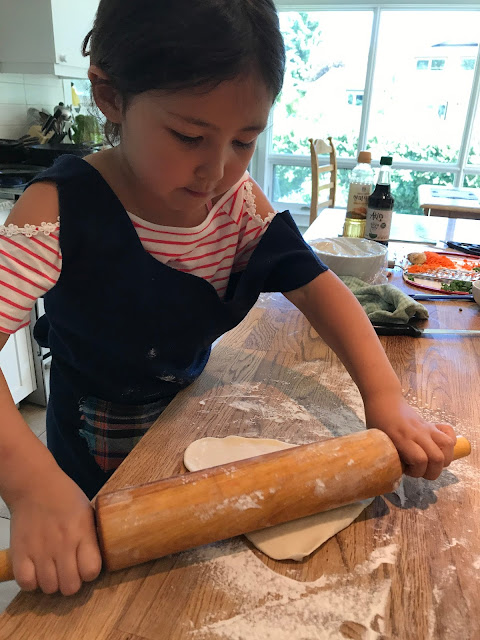 Fold a third over, then the other side, roll again to make a very thin sheet 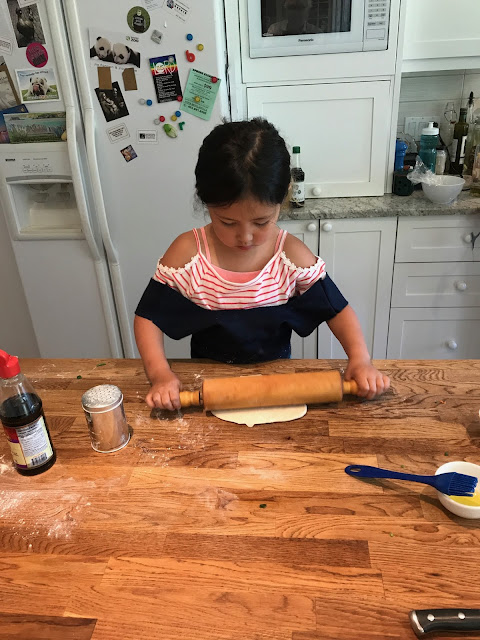 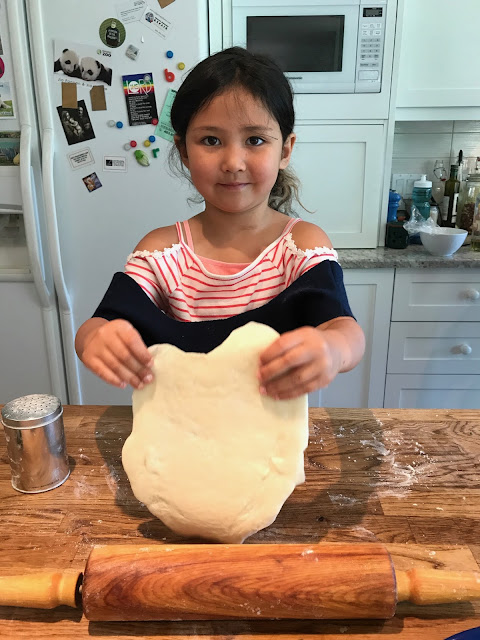 Add oil to the dough. I used Olive oil but lard or chicken fat is said to be better.. Now where would I find Chicken fat?

One of the sites, sprinkled flour and coarse salt over the oil.  This site added the following as did the street vendor in the video above. 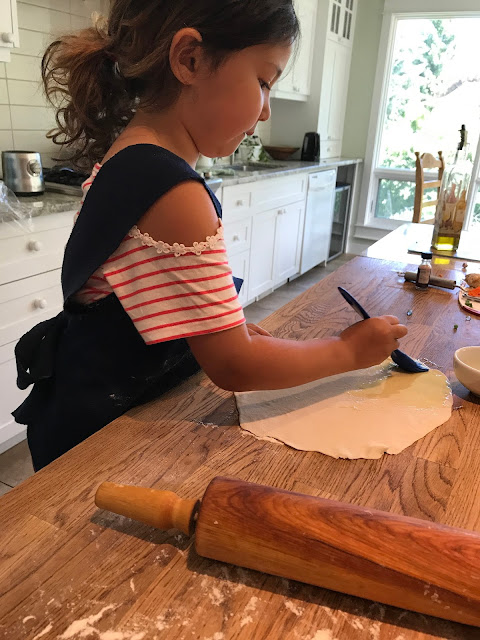 Add the chopped green onion, but certainly I should have added more as in the above video on the street vendor that makes this pancakes. Since I had scapes from my garlic, I added these.  My granddaughter also thought grated carrots would be great! 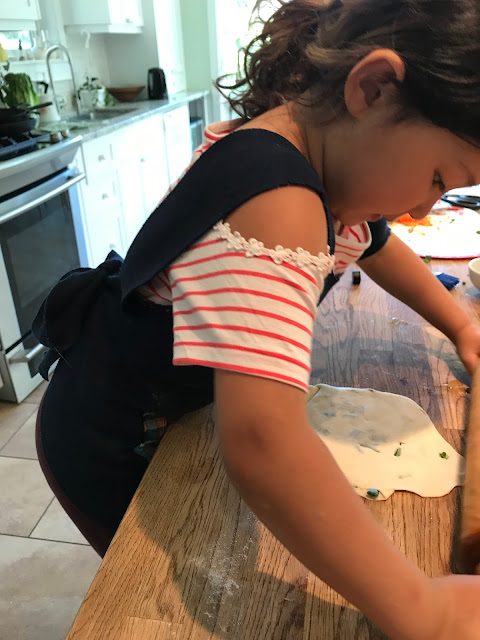 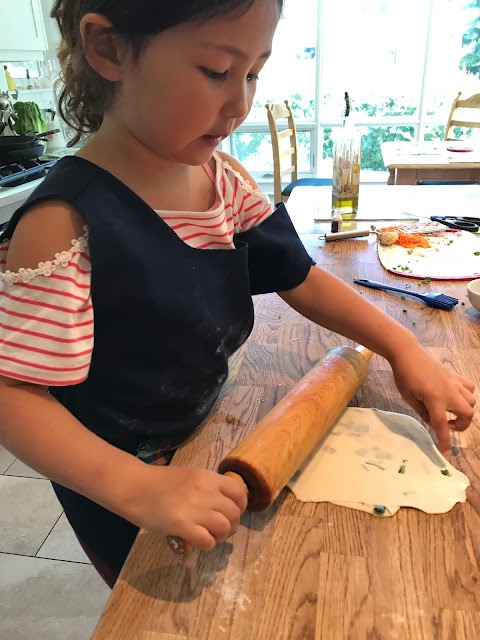 Roll up the dough as a pinwheel and flat the roll to release air, oil the strip and roll up to form a small disc. 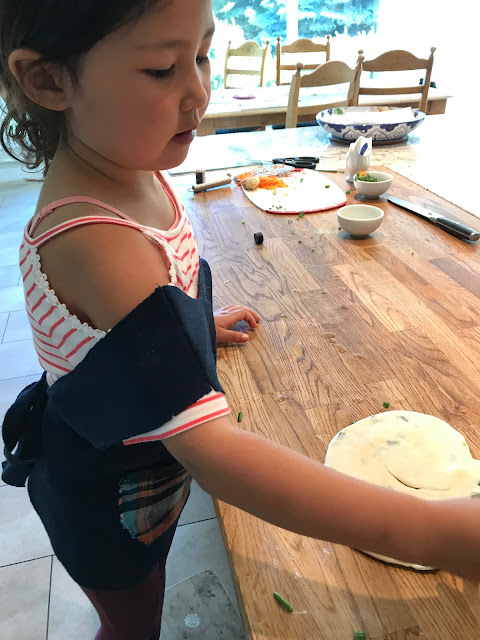 Roll out the disc to form a flat pancake 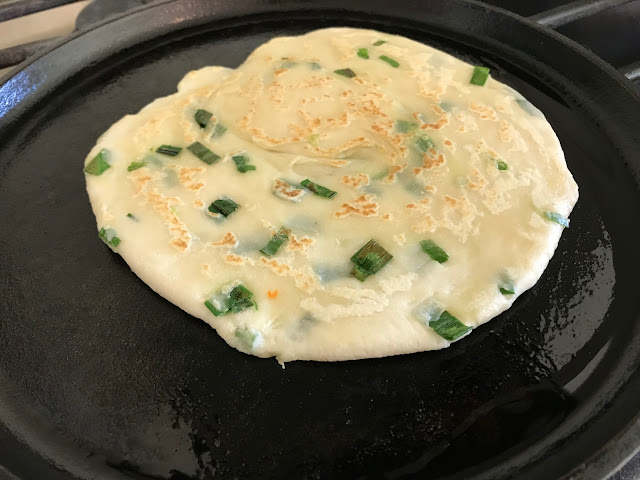 
This video is too cute to not include... Enjoy!


Posted by Here and There No comments:

I love using Instagram as I gleam many ideas from the postings.  Recently a posting of Bon Rieu sent me on a search of this recipe and what makes this soup authentic.   The addition of mixed seafood, ground pork and egg to a hot broth made me wonder if this was done as one tired of making wonton dumplings and wanted to use up the mixture quickly! 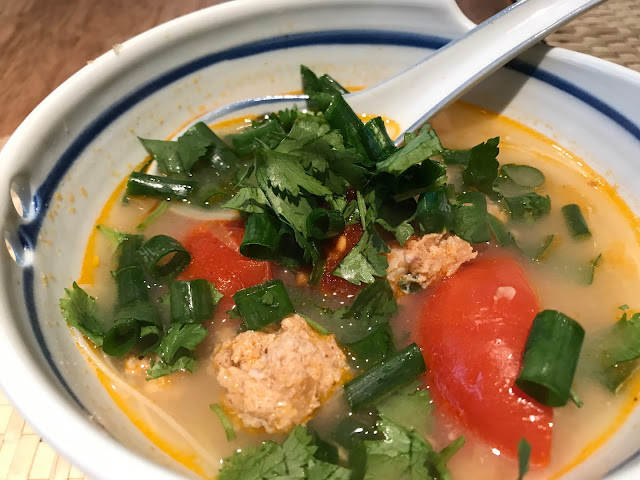 I first saw the soup picture below on Instagram posted by the Little Vietnamese Kitchen, and wasn't quite sure what it was.  Thuy Pham Kelly runs her own restaurant in London and a place I would love to visit.

Here is a video of her making chicken soup 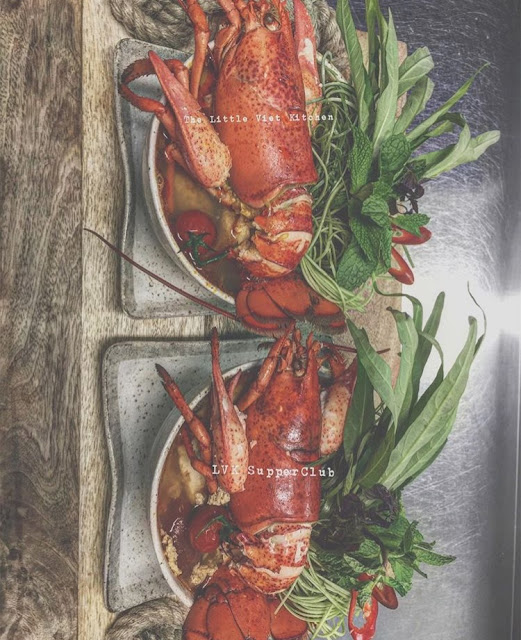 Before my nursing reunion in Winnipeg, I was having my nails done and was given the soup recipe by the two young women that were doing my nails.  They became excited to know that I wanted to make this recipe.  The translation of this recipe by these Vietnamese speaking women was lost on me, until the owner's young niece came to our aid.  She did forward me a recipe and I did research many sites.  Some recipes used so many purchased items for this soup that lead me to look for a soup that used fresh items only. 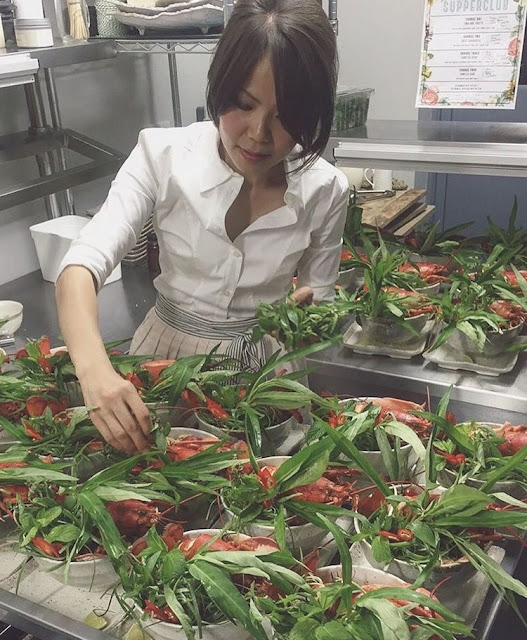 This is an incredible picture that was posted on Instagram by Thuy Pham Kelly. Where would you begin?

A lot of the products for this soup are listed in blogs can only be found in Asian stores.   I am not quite sure what the authentic taste of this soup is.  This recipe was said to have been developed by those not in Vietnam and not having readily available fresh Crab or Tamarind.   Dried shrimp was also used in making the Rieu. 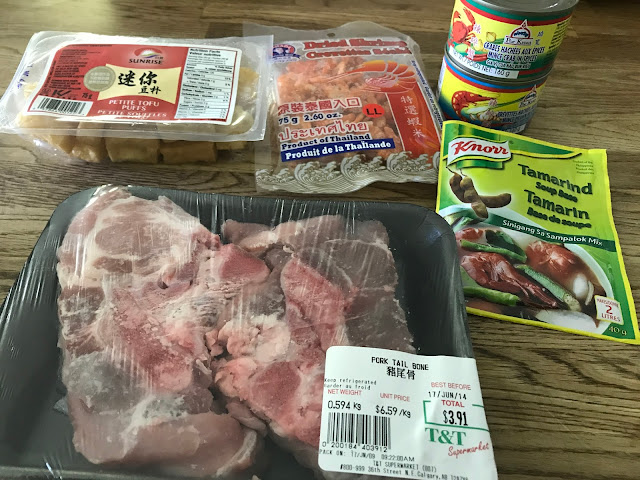 I find that Pork Rib bones are harder and harder to buy in the local supermarket, but plentiful  at the Asian Market.

Fill a large pot with water, add salt, then the washed rib bones, bring to boil and parboil the ribs until semi cooked.
The Vietnamese add this interesting step in making their broths.

They throw out the water and wash the meat again

Starting fresh, fill the pot up with fresh water, add salt, an onion and some bay leaves.
Bring to boil, skim the top if necessary, then reduce to simmer for 2 to 3 hours. 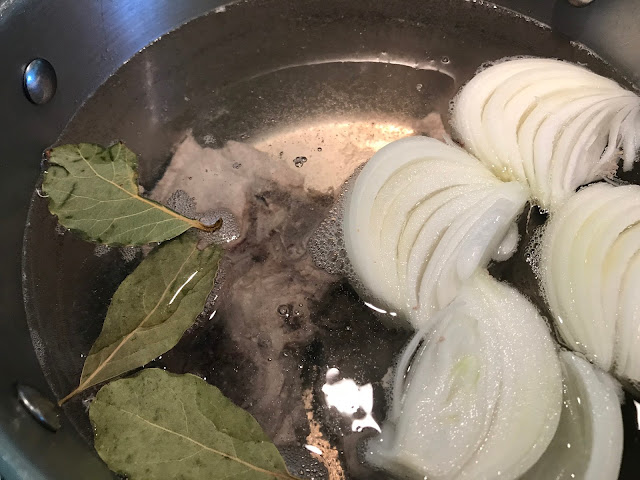 One of the things my Mom always did for a clear broth was to pour the hot broth through muslin cloth which I did. 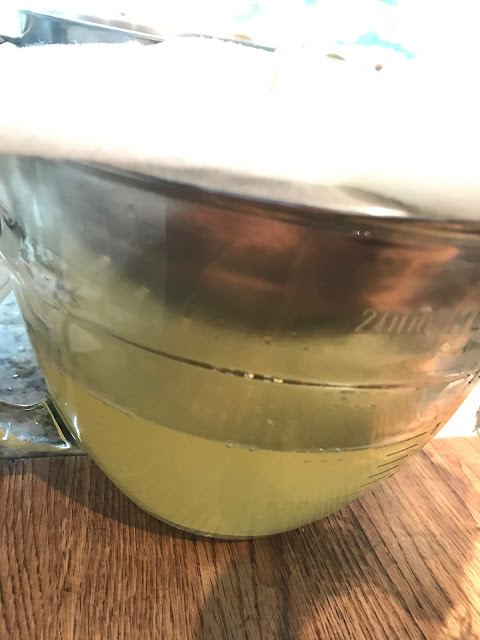 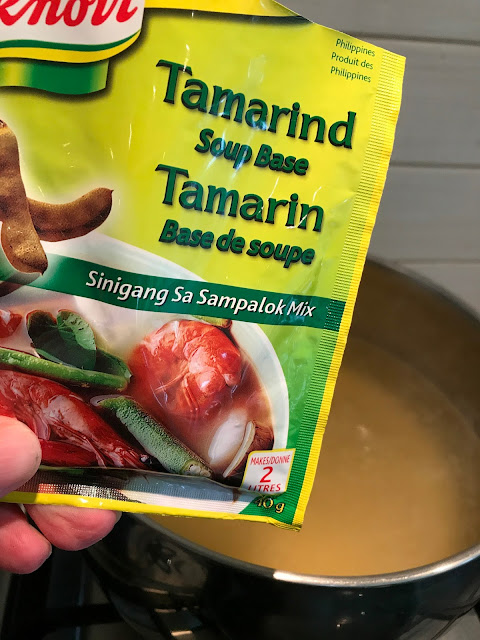 I was able to find this Tamarind soup base in the Asian market with some help.  According to The Spruce;
Tamarind is a sour, dark fruit that grows in a pod. While some cuisines use tamarind to make desserts and even candy, in Thai cooking it is used mostly in savory dishes.  When combined with sugar, tamarind gives dishes a beautiful sweet-sour flavor.


A tablespoon of Tamarind Soup base was added to the soup.

I did see some recipes where vinegar were added and I would think that vinegar would work as well if you can not find this soup base.

I also must add that after making such a clear broth, the soup mix muddied the broth, which vinegar would not!  Some recipes for this soup calls for Fish sauce. 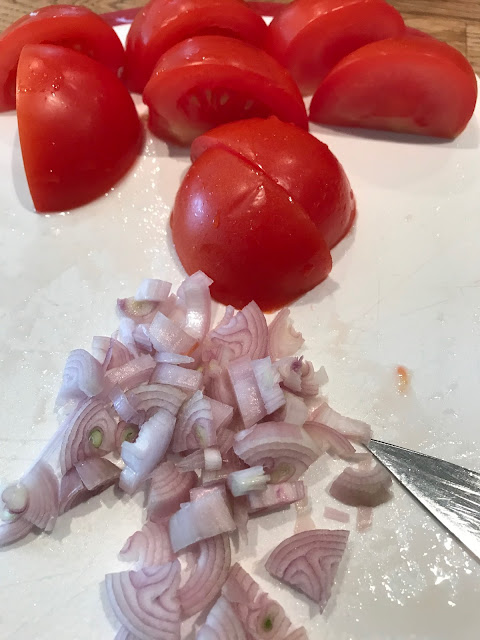 quarter the tomatoes
1-2 chopped shallots
3-4 garlic cloves
1 tsp sugar
Saute in oil, until tomatoes soft
gently stir to not break up the tomatoes
Some of the recipes used only minced garlic, others only used minced garlic
I used both.
Some of recipes just added  the tomatoes uncooked to the broth and then added the sugar into the broth 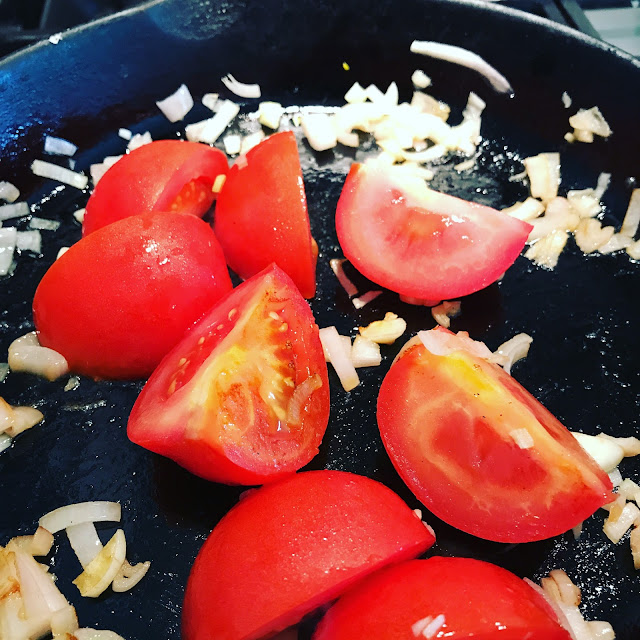 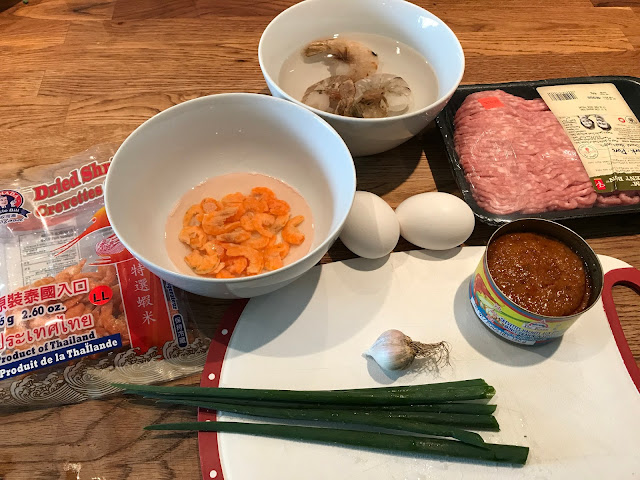 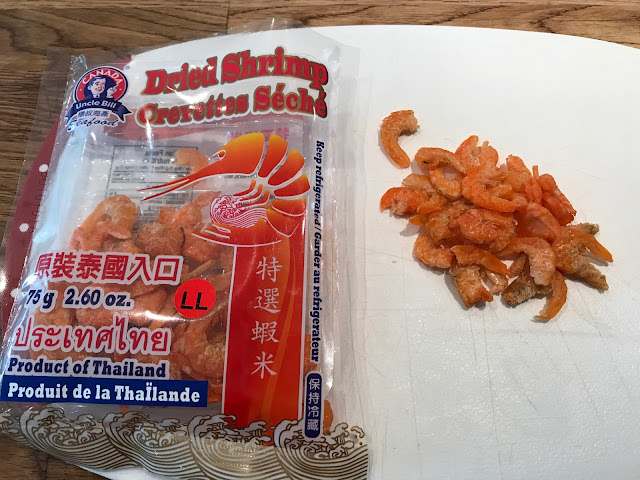 The dried shrimp were also found in the refrigeration area of the Asian market. The shrimp needs to be washed a couple of times and then soaked in hot water for 1 -2 hours to make it easier to chop. This liquid that the dried shrimp soaked in can be added to the broth.

You could also pulse the dried shrimp in your food processor.  Personally if you can't find them, I would not worry about it.  I would just add more fresh shrimp or crab, not to mention the cost was five dollars a bag.

The one item that I do believe was amazing tasting was the canned Minced Shrimp in spices.  The label read "gia vi nau bun rieu" and added a great flavor! Some blogger said this made the soup.  However, this can also be omitted as does have a lot of additives and oil.  Check out this recipe by Run Away Rice.  as she suggests to just add more seafood. 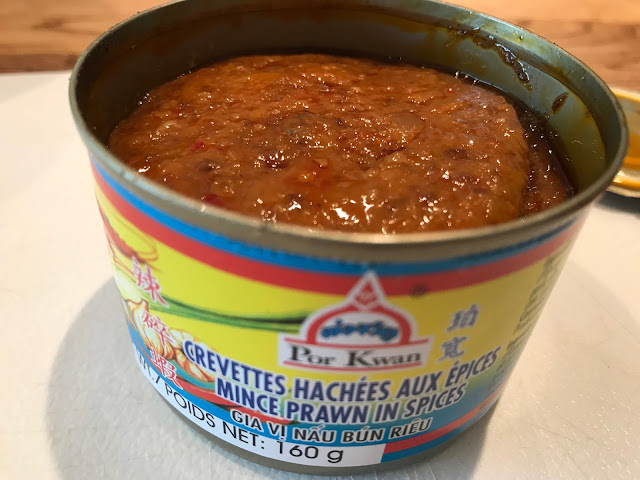 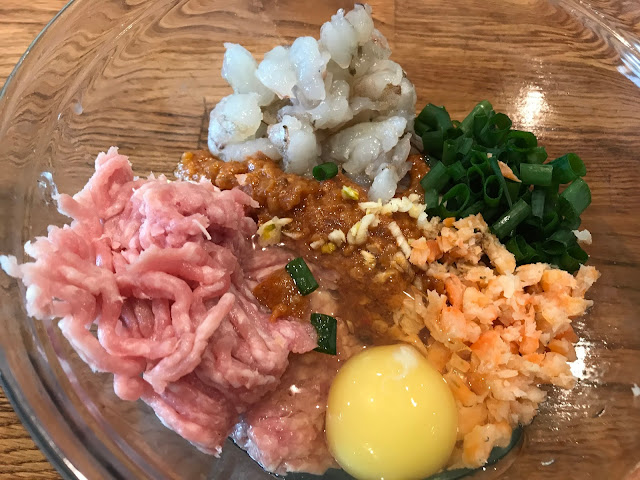 Mix the ground pork, canned minced shrimp, dried shrimp,garlic, green onion, fresh shrimp.  I like the look of a coarse mixture and also like to see what I'm eating, so I mixed this by hand.  But you could also pulse this in a Food Processor.  Some of the recipes also did not use ground pork only the seafood to make the rieu. 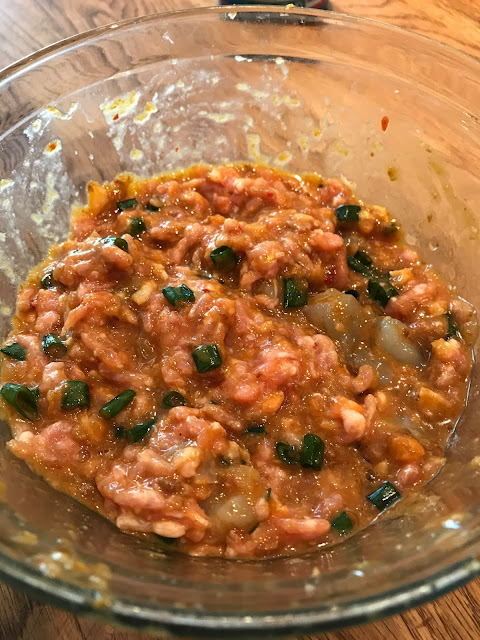 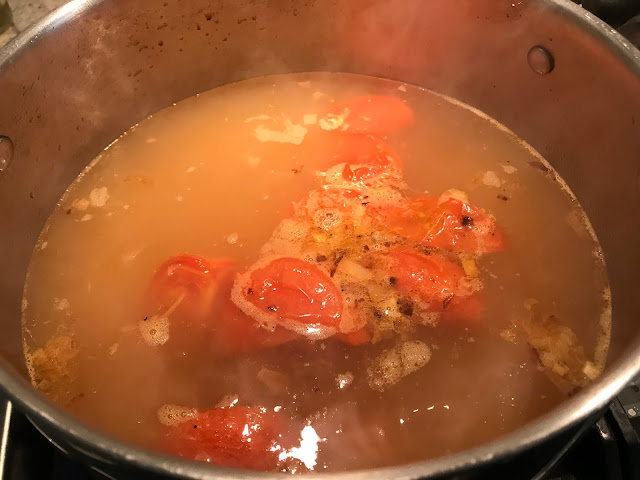 Add the tomatoes to the soup, bring to boil. If Tomatoes are uncooked, cook them until soft.
Add the Rieu or meat and shrimp mixture to the boiling broth.   Some of the recipes suggest adding the mixture in small spoonful so that you have small meat patties.  My recipe suggested dumping everything in at the same time. I would add it in spoonfuls the next time for smaller patties.
Reduce heat to simmer
The soup is ready when the rieu flows to the surface. 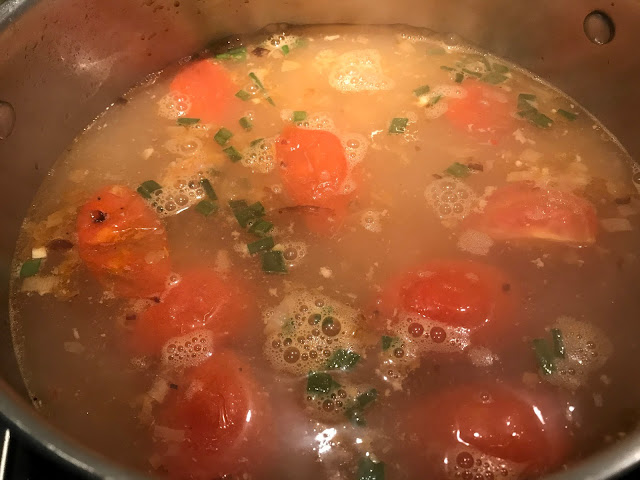 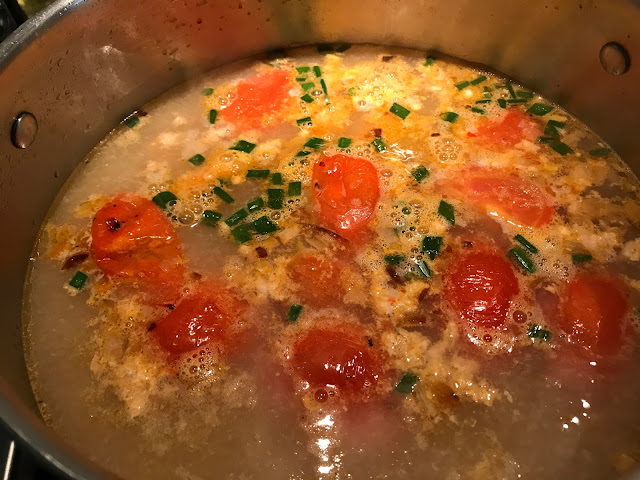 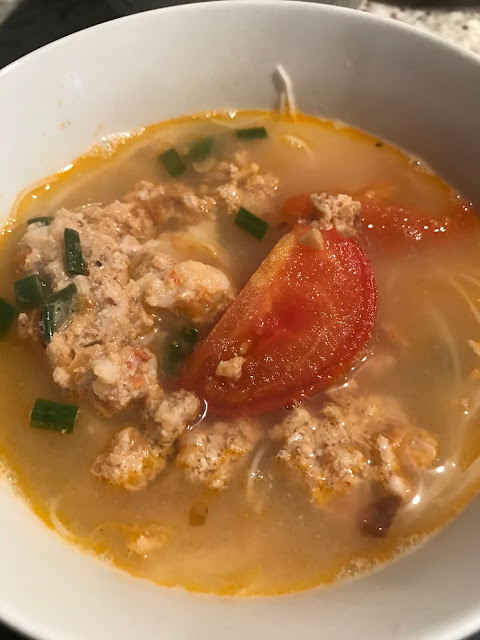 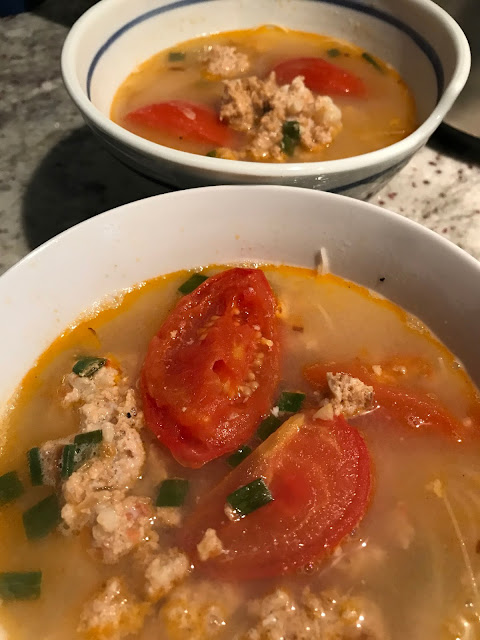 As with the picture above from the Little Vietnamese Kitchen, garnish is most important.

Slices of Lime, Bean sprouts, hot sauce and herbs like basil, cilantro, perilla leaves and water spinach are set out for garnish.  The water spinach uses a special tool to cut the stems.  Cabbage or celery can be be also used

I will be making the soup again, but relying more on fresh products and added more tomatoes to the soup.