My grandmother had Blue Willow china. I remember sadly her china in a orange carte box at her auction sale and being sold for next to nothing but as a young child couldn't afford it.. Now I long to set my table with that china.  As a child I was intrigued by the scenes on the blue dishes which would stimulate images of the Far East. As a child looking at the pattern on the plate,I would imagine crossing the bridge and explore the houses with the curved roofs or sit under the pine tree.   The legend below certainly illustrates the magic in that pattern to me as a child and now as an adult!

Blue Willow, The Legend...Once there lived a very wealthy mandarin who had a beautiful daughter named Hong Shee, who fell in love with her father´s secretary, a man named Chang.  To keep them apart, the father imprisoned his daughter in the palace.  One day she escaped, and the two lovers raced over the bridge to a waiting boat.  They managed to elude the mandarin, reach the boat, and sail away.  A storm developed; the boat foundered; and the couple were lost at sea.  It is said that two love birds appeared immediately thereafter - the spirits of Hong Shee and Chang, and live on to this day.
Blue Willow was first offered almost two hundred yeas ago by a famous English maker of fine china.  Blue Willow is still the most popular pattern to ever appear on dinnerware.  The popularity of the pattern has not faded with time or life style changes as fads and fashions usually do.  Blue Willow is as collectible today as ever and is still being made in England and in many countries around the world. 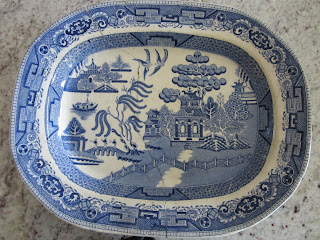 When my husbands elderly aunts moved into a nursing home, they sent us  this turkey plate that they had used in their family for many years. Sadly it had been broken in transport and although it was repaired, it can not safely be used  as a turkey platter.

so happy this is a comment about the blog and not about someone trying to sell me crap!

I just got a piece like this and I am trying to find more information about it. Mine has a Staffordshire Warranted P mark on the back. Any idea who made it?