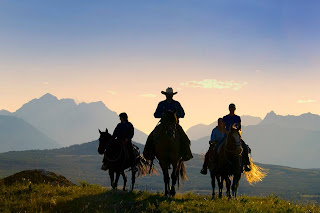 The theme for this month’s blog for the Canadian Food Experience Project to identify our Canadian voice is: A Regional Canadian Food: (identify your region).  When you think of Alberta, beef comes to mind.

But what about Calgary?  For the past month, I have been thinking about this and doing an informal survey with anyone who would talk to me. What local products do we have? I do have Jack Rabbits under my spruce tree and I did see a coyote prancing by our house with a peasant in his mouth as we live by Fish Creek Provincial Park!

As far as I can find out there is no food named after Calgary. I’m thinking about Winnipeg Goldeye!

One of the participants of this project has written about the Caesar drink that was first made here in Calgary in 1969.

Ginger Beef is attributed to being first made in Calgary.  Ginger Beef although a favorite of one of my sons has too many steps for me to do. Anyone who knows me, knows  that I tend to skip steps unless I can be convinced the step is truly necessary.  Basically Ginger beef is marinated strips of beef, then coated in a batter mixture, deep fried and served in a sauce with julienne vegetables.

Another dish that was suggested to be a Calgary wonder was prairie oysters or Rocky Mountain oysters. This year the festival celebrates at Buzzard’s Restaurant and Bar 20 years of its famed Testicle Festival.  No one wants to come with me to the festival and luckily I found that Montana also hosts a similar festival! I was off the hoof so to say about this so called Calgarian delicacy.

So what is our regional dish?
Two weeks ago, downtown Calgary was shut down for 12 days due to lack of services such as electricity, gas and water after a flash flood of the Bow and Elbow Rivers that snake through the city. The Calgary Zoo was devastated, evacuation of tens and thousands of residents with some areas not expected to go home for over a year.   In spite of the damage to the Saddledome, the Calgary Stampede will go on.  However, some of the events will be cancelled or moved to other locations.

The flood has shown the worst that nature can dish out. Yet, during the storm and continuing, the best in human nature has come out.

My daughter in law’s bridal shop in downtown Calgary was water damaged. It is difficult to express the emotions.  Yet the feelings of my son had when his place of employment, outfitted and sent help to bail out the muddy water from the basement and rip out the damaged walls and flooring were one of gratitude.

Help to those in need has been remarkable!  The community spirit of Calgary shone through as we all helped one another to cope in whatever way we could.

To aid flood relief, Tim Hortons, our Canadian Coffee Giant created a doughnut, the Wild Rose,shaped like the provincial flower with a cream centre. 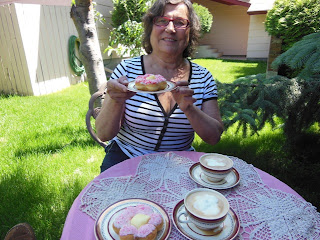 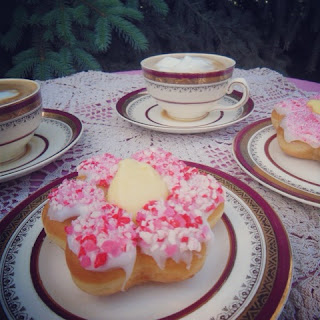 In 1970, Madame Benoit wrote in her Canadiana Cookbook about Alberta.  “Beef and ‘Red Eye’, ranch barbecues, the dashing wide brim of cowboys’ hats, the French touch in Edmonton, the  Hutterites in Lethbridge, in the prairies wheat pool (elevators), sheep in the mountains, cattle ranches, perfect steak, pioneer’s spirit, the FWUA (Farm Women Union of Alberta) women you keep the pioneer traditions alive, the beauty of Banff and Jasper, all give Alberta her interesting personality”.

Stereotypes live long and its hard to change them. Calgary has been known from the beginning as a cowtown and still has and maintains that Wild West image. Calgarians love to hate this image, yet revel in it. 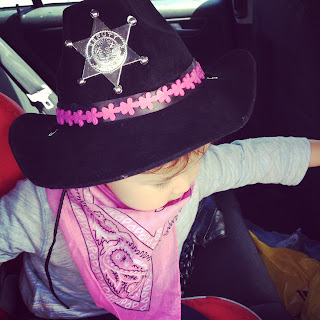 Calgary Stampede kicked off with its Parade. Pancake Street Breakfasts serve up flapjacks with sausages throughout the downtown and different communities.  Businesses also get caught up with Stampede fever and treat their employees to Stampede Breakfasts and Barbecues. Throughout the city, sidewalks and parking lots of business and malls are decorated with straw bales and wooden fences along with live bands playing country music.  Calgarian are seen everywhere in cowboy boots, blue jeans and cowboy hats at work or at play.  The small town atmosphere in this million plus city population once again is experienced as it was during the flood.  Calgarians fearlessly maintain this image! 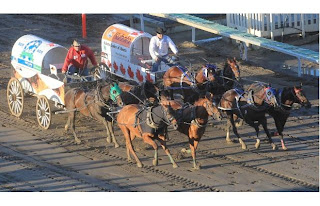 As fundraisers are held through the city for different charities, the dinner or evening meals usually serve up  heaping plates of beef on the bun or burgers with creamy coleslaw.  The other standard side dish is baked beans.
Beef and the Red Eye 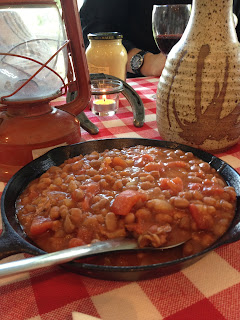 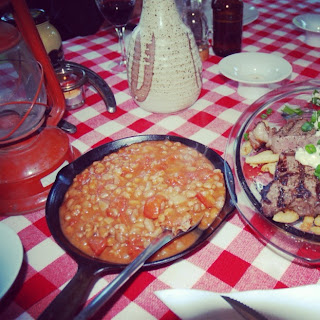 Madame Benoit talks about her mixed feeling about being “served a superb slice of roast prime rib surrounded with baked beans in Calgary” and wondering how they possibly went together.  She writes “one bite of each made me understand the why of this luscious Western Fare”.
2 lbs large navy beans or red kidney beans
1 cup tomato ketchup
1 large onion finely chopped
1 teaspoon pepper
1 teaspoon dry mustard
2 cups of canned tomatoes
1 pound fatty pork , 1inch cubes
1/2 cup of sugar
3 teaspoon salt

Wash beans, cover generously with cold water in a bowl and soak overnight. The next morning, pour beans and water into a sauce pan, add more cold water so that they’ll be well covered. Bring to boil, cover and simmer over low heat 2 hours. uncover and cook over medium heat  1 to 1 1/2 hours or until beans are tender and sauce is thick, then taste for seasoning.
These beans freeze very well and can be kept 3-4 months. Place uncovered and still frozen into a 375 oven until hot.
Of interest was her comment  “as the Man moves into the kitchen” in the seventies. “Men cook mainly for pleasure because they like to eat and are not obliged to do it. Their stint in the kitchen being short lived, they feel freer to make the most of what they cook. They like to try new creations, however wild they are.”  She  shared  recipes such as Drunken Meat Balls, Barbecued Lamb Shanks, Steak in the Rye, Pioneer Omelette, Farmer’s Pancakes  that were given to her by Albertan men.

All the recipes were of great interest to me as there was an experimentation with local products available at the time.  I have picked the recipe labelled Richard’s Steak in the Rye as in Madame Benoit words “ if you have the Calgary spirit, try this 1 1/2 inch thick boneless sirloin steak cooked over hot coals or on the stove”.

Steak in the Rye 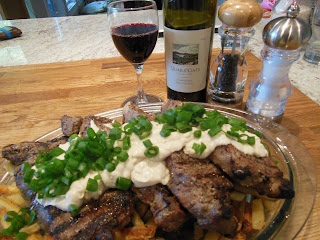 Mix the salt and pepper and rub into both sides of the steak, patting it in.
Blend the butter and oil, roll steak into it until most of it is absorbed. Do this if you intend to barbecue or broil the steak. Broil as you usually do the steak.

To pan fry, use a large cast-iron frying pan. Heat the oil and butter until quite hot.  Quickly brown the steak on both sides over high heat for 3 minutes, then lower heat to finish cooking as you like it.

Remove steak to a hot platter.  Add to the pan the cream, consommé and rye.  When the steak is barbecued - warm up the ingredients in a pan and pour over the steak.  Serve with “a mess” of French fries and slice tomatoes.

Last night, as we usually do is have family dinner on Sunday. 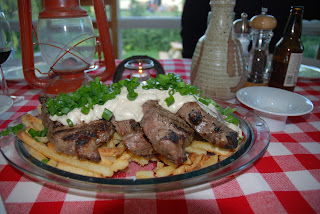 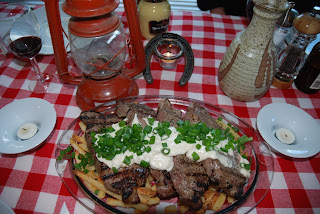 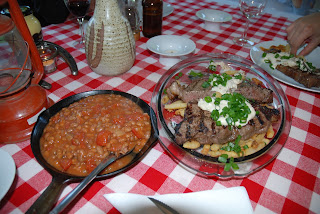 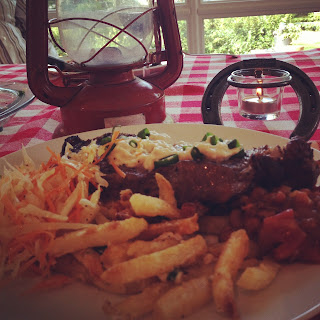 Hi, Marilyn! I found you through Valerie's blog:) I'm Calgarian as well and I thin you've found the perfect recipes to share for Calgary! I also love that Wild Rose Donut, although I forgot to try one.. were they yummy? xx

Loe your introduction to me of this cookbook. Found it and have ordered it for myself! What a fun read!
Great recipes... and the Alberta Wild Rose Donut... crazy.
:)
V

Barb Just a Smidgen, thanks for your comments, I know I think there are a few of us Calgarians.. Your site is lovely with great pictures!

Valerie, hopefully you find the book as interesting as I do. Madame Benoit was one incredible lady! Her cookbooks are always great reading!