The theme for this month's challenge for the Canadian Food Experience Project is cherished recipes.

Having just returned from Nova Scotia, I thought of my Mother In Law Mary when I saw a Chicken Pie made by her granddaughter Martha for her father.   Martha talked about her mother making the pie and how she now makes it using rotisserie chicken from the supermarket and frozen veggies. Martha was making this pie as a comfort food for her father.

Savory Pies were not made by my mother and I wondered after seeing chicken pie sold in the Deli at Jo-Ann's Deli Market and Bake Shop if this was an Eastern thing as I do not generally see chicken pies sold in Western supermarket.

This recipe brings memories of first meeting my in-laws and the beautiful dinner party hosted in my now husband's apartment.

My husband and friend Peter had rented a fully furnished apartment in Winnipeg.

Bill and Peter's apartment never looked so grand with the chandelier light dining room sparkling with the crystal and fine china on a white tablecloth.

The meal began with fresh grapefruit served in their own shells garnished with a cherry on top. Below are family pictures taken in the Maritimes during the Christmas season with beautifully set table with grapefruit as the starting dish! 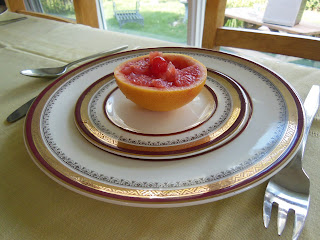 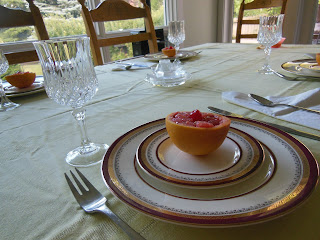 The steaming hot Chicken Pie was served in the pyrex dish it had been baked in.
The pie was filled with a cream and chicken based mixture with carrots, potatoes, mushrooms and peas topped with pastry cut outs, garnished with fresh parsley.  I later learned that this was Mary's signature dish.

The meal was finished with a slice of Homemade Lemon Chiffon Pie and tea.

On my first visit to the Maritimes, I did see Mary prepare this dish in her own kitchen.  The recipe below is more technique and guide than actual measures.

A basic white sauce was made for the chicken.

Carrots, celery and potatoes were diced and pre cooked in the pressure cooker.

Peas, carrots, celery, potatoes and mushrooms were mixed into the white sauce as was the cubed chicken

The mixture was added to a greased pyrex rectangular dish.

Pastry was made and cut out using a three inch circular cutter.

The pie was baked until the pastry was golden brown.

Her daughter, has this to say about her Mom's Chicken Pot Pie in a recent email.

Mum either parboiled the veggies (which is what I do for 1/2 time) or most  likely did them in the pressure cooker.  She had carrots, potatoes and frozen peas. Also celery and diced onions. She always put mushrooms (canned) in one end only since the kids didn't eat them.  She used a 2 1/2 inch round cookie cutter for the pastry - made with lard - for each serving.  This was her company dish and we all loved it.

I make it with a white sauce using white wine. I love it cold the next day! Martha

Frozen peas and carrots are used.

At first, I used a can of mushroom soup, but now make my own white sauce.

Pastry was first used, then I moved to mashed potatoes and now covering the chicken mixture with thinly sliced potatoes.

The pie is baked at a moderate oven covered with tin foil until the potatoes are baked.

Browning the top under a broiler.  Grated cheese can also be added before broiling. 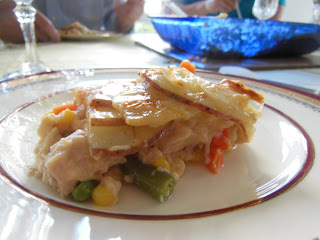 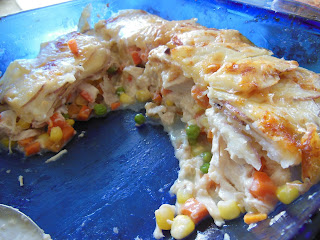