Mushroom hunting in Sicamous BC

This year, Bill’s power system course was planned around the wild mushroom festival at the end of September in Sicamous!

On their first festival, we had stumbled on the festival when driving home from an IEEE meeting in Vancouver.  On the wine route, Bill got his first project as a consultant.  We stayed the evening in Sicamus as Bill worked on his assignment, I attended a talk by Paul Kroeger on Magic Mushroom and the culture arising in BC.  What amazed me was the number of tables filled with different mushrooms that had been picked that day in a guided tour through the forest.  There was a table of poison mushrooms, aromatic mushroom and edible. 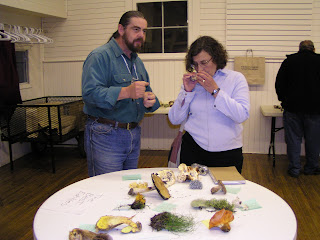 This year, registration was once again at the Red Barn.  In side the barn, were tables of mushrooms labelled with bright pink neon as poisonous and green for edible, along with yellow or ”not sure”!  The group gathered, with brown paper shopping bags, to listen eagerly to the instructions given as to location and use of the whistles, which everyone received.  In our midst was Paul Kroeger grey ponytail, with a grizzly beard in a red and black flannel shirt as his followers greeted him warmly.  Yard Creek Park a few miles east on Highway number one was our destination.

Spending a few hours enjoying the sights and smells of the forest, lush green, lightly cool and damp, yet musty from the decomposing was peaceful and restful.  Although I enjoyed this greatly, I was on a mission to not only find pretty unknown mushrooms but I did want to find chanterelles and lobster mushroom! How difficult would it be to find these bright red lobster coloured mushrooms in the green forest!  But I was unsuccessful!  The chef from the Grizzly in Banff who was also one of the guides came to my rescue. http://banffgrizzlyhouse.com/  “Come” he said, “ I saw lobster mushrooms when we drove into the park.”  First, we first found one solitaire white chanterelle sitting proudly above the ground about six inches in size.  According to him, lobster mushroom and chanterelles go hand and hand and usually under cottonwood. 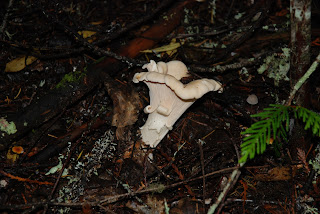 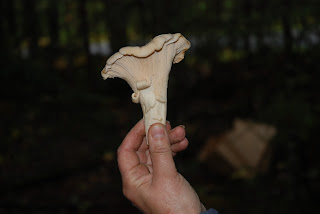 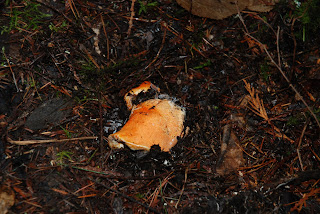 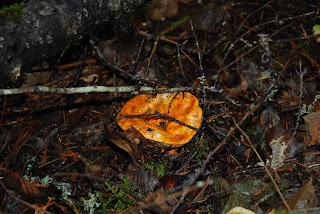 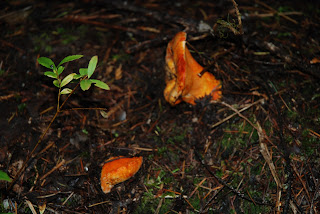 We also found honey mushrooms, smaller sized round brown caps that grow in clumps on tree stumps or on dead trees.  They were referred to as “edible but not incredible”.  I wondered if Mom would agree with that label for pidpenky! 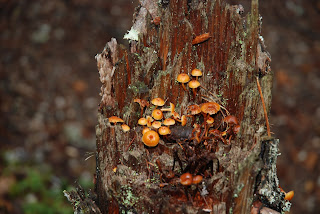 These honey mushroom or “pidpenky” as they are referred to in Manitoba where in large clusters around trees and up tree trunks, very aggressive yet beautiful. 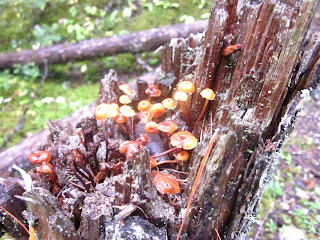 With two large bags of earthy smelling mushrooms, the challenge was “how do I keep these mushrooms until I get home?”  One of the guides said to treat it like any fresh vegetable.  They both should be keep in a paper bag with the lobster mushroom keep in the refrigerator and the chanterelle not!   This advice also varied as some said that the mushrooms should be kept dry, others said to keep under a damp tea towel.  All agreed the best method was to sauté them and eat them right away.  Some did say to parboil the lobster mushrooms first.  The lobster mushroom that we had in the lasagne during our guided tour was a disappointment; the mushrooms in this dish were large slices, chewy and tasteless.  This disappointment was especially apparently in the young chef from the restaurant le plateau in Kelowna. http://www.leplateaubistro.ca/.  Darren had found a bag of lobster mushroom along the riverbank that he was going to use for his Soupe du Jour that evening. 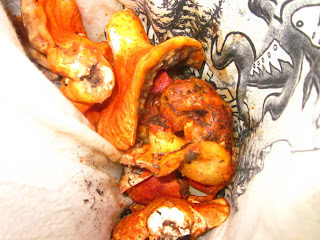 According to one of the women from Burnaby, her advice in preserving the mushrooms was to chop up the mushroom and whip into butter, then shape in to a log, freeze and cut off what you need for your recipes.  In a blog “nourishing” kitchen”, in the recipe for wild mushroom butter, the mushrooms are first sautéed along with shallots, thyme and mixed into a cup of butter and then shaped into a log.  This should keep one to two months in a refrigerator as fat acts as a natural preservation.  http://nourishedkitchen.com/wild-mushroom-butter/

Since we were travelling, I was not too sure how we would be keeping the butter cool.  Overnight, in the hotel room, I left the chanterelles out on newspaper and the lobster mushrooms were kept in the refrigerator in a paper bag. 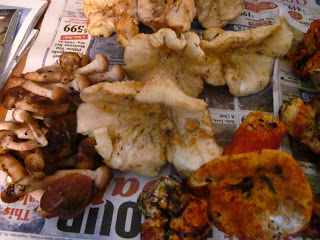 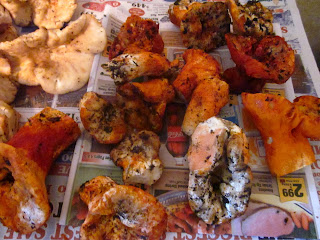 In Vancouver, I kept both mushrooms in a refrig and checked them every day, The lobster mushroom seemed to like being in the refrig as looked the same where as the white chanterelles started to lose their lovely white and shrank in size.

The advice from different chefs in Vancouver also varied from the French chef in La Bretagne Creperie on Jarvis, who the waitress assured us grew up picking Chanterelles in France, the Chef at the Cactus Club on Burrand, to the chef in Towne Hall on Alberni.  All their varied advice made me think that although they knew how to cook with mushroom, they were not familiar with long storage of wild mushrooms.  Hilarious solutions as to what to do with all these mushroom from chefs, including a chef from Granville Island who was doing edible BC meals.  In fact, one of the chefs was using golden chanterelles in one of his feature dishes.

On Thursday, on arrival at out B&B, Grape Escape in the Okanagan, the owner said she could dry both of the mushrooms in her Electrolux oven that had a drying feature.  The two huge heavy bags of mushrooms were dehydrated, into two small bags! Yes, I had been advised that Chanterelle do not dry well although lobster mushrooms do, but this seemed like the best solution.

The following morning she sautéed in butter some of the lobster mushrooms. The mushrooms retained the red covering but were very tasty and did go well with the heirloom tomato galette she had prepared for our breakfast. http://www.guardian.co.uk/lifeandstyle/2010/aug/14/tomato-galette-recipe-vegetarian-ottolenghi

How interesting, we were stumping through the woods on the same mushroom hunt with the writer of the blog sun hammered
http://jill-stanley.blogspot.com/2010/09/incredible-mr-intrepid-scores-again.html

In talking with my Aunt Florence about mushroom hunting she was most interested in my experiences.  She talked about mushroom, pidpenky or under the stump, which they picked every fall.  These were the honey mushrooms that I found in BC and was told to leave behind for others who were not as successful as me as in their words these mushrooms were “edible but not incredible”.  She talked about Kozare which were a wavy reddish brown top mushroom found in the summer any where close to water on the farm under bushes.  I remember seeing these beautiful mushroom poking out through the ground under the bushes along the south road of the farm.

Golden chanterelles were also found on the farm.  In fact, Aunty relayed a story on how Mom and her visiting the elderly woman who lived on our farm in her own little cottage and to whom Dad would refer laughing as the Grandma he bought with the farm.  The elderly woman had on her table a basket of golden chanterelles and my Mom was wondered if they were safe to eat.  The elderly women assure my Mom by saying, they were perfectly fine as she and I had eaten the mushrooms the day before and in her words we were fine!  Needless to say my mom and aunt were horrified that she had done this when she was looking after me as a toddler!

In posting pictures of the wild mushrooms found on facebook, a friend asked, “what is this obsession with mushrooms?”  Now I know this obsession was formed very early in my life!
Posted by Here and There