Having fresh dough in the refrigerator, comes in very handy.    For an appetizer at my son's place, I made a pizza using Bartlett pears , Gorgonzola cheese and Prosciutto Parma. 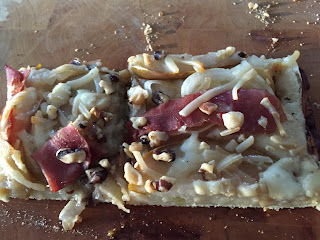 Slice one onion thinly and sauté in 1-2 T of Olive oil until soft.  Add a bit of water to steam the onion.   Be patience in this steps, as the long you take to caramelized the onions, the happier you'll be.

Using a seasoned cast iron pan, add a thin layer of dough.
Spread out the caramelized onions
Add slices of Pears in a decorative fashion.
Using kitchen scissors, cut strips of prosciutto and place between pear slices.  You can crumble cooked bacon in place of prosciutto.
Crumble a little bit of Gorgonzola and mozzarella on the pizza
Crushed walnuts go well with  the cheese and the pears
The layering can start with the cheese and end with Caramelized onions, but I like adding the onions first.

Bake in a hot oven until golden and the cheese melted.. 400 to 415 degrees for around 15 minutes or on your BBQ. 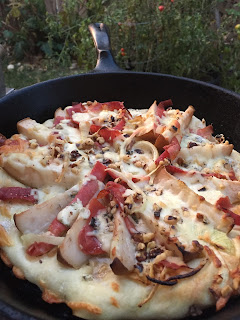 For some sweetness, I drizzle some Pomegranate Molasses on the top

One of the comments as the guests dug in was that it was "almost restaurant quality."  Hmmm!

For my Granddaughter, a mummified hotdog!

I think I need some work on this mummifying stuff! 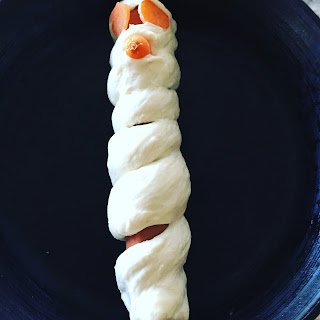 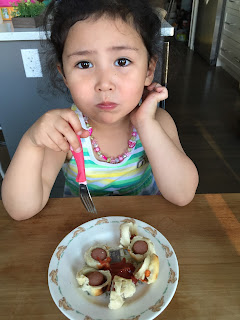 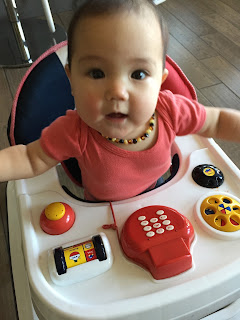 Just for you Aline! 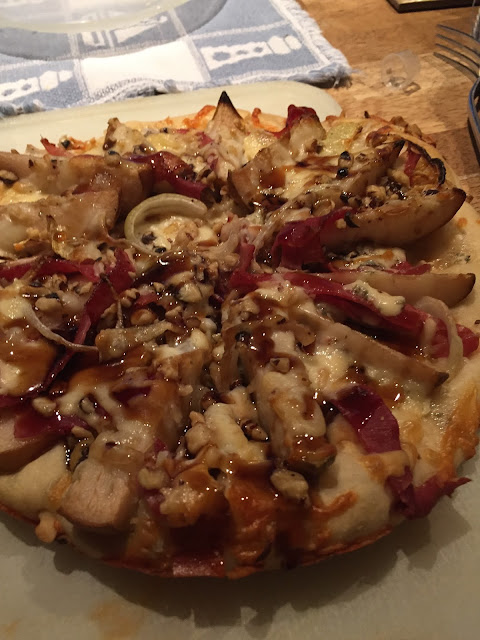 My son had slow roasted a pork roast which was delicious with the pizza. 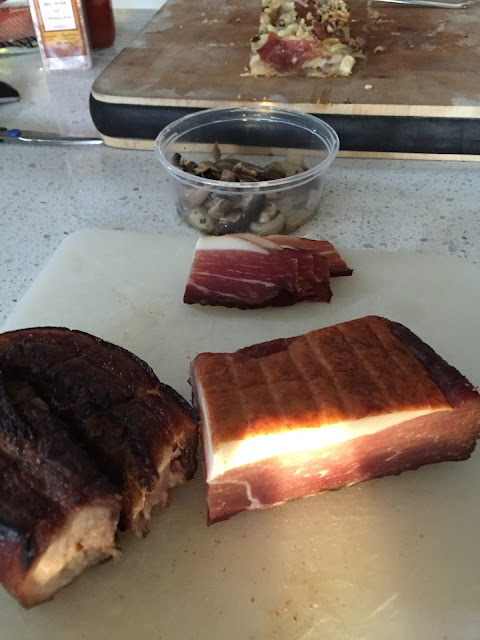 Increase of Organic farming in Canada

Fifty years ago, farming was very different.  Mixed faming, along with purebred Heifer cattle maintained a good standard of living for a family of six.  A large garden, the pride of my Mom’s kept us going through the summer and winter and also shared with others if their gardens did poorly.

After my Dad’s death, the farm equipment and cattle were sold.  My brother has gradually developed the farm again and proudly as a certified organic farm. 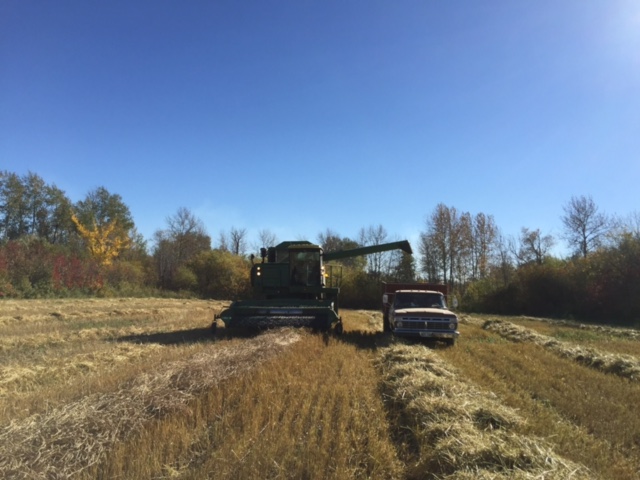 This  picture is taken 50 years later in the same field that I took a picture of my Dad and that year’s harvest.

Last weekend driving through the Okanagan and spending some time in the Penticton Farmer’s market to see an abundance of local products and vendors.  10 years ago had this same market had few vendors.  This explosion of organic farmers and selling products directly to costumers has done away with the middle man and the prices were on par with the supermarkets.  I walked away with 10 pounds of organic apples, two different varieties and pears all for 10 dollars! Slices of apples and pears were sliced with a paring knife for tasting; fingers were weathered and stained with black soil! Yes, this was a farmer selling me his products! 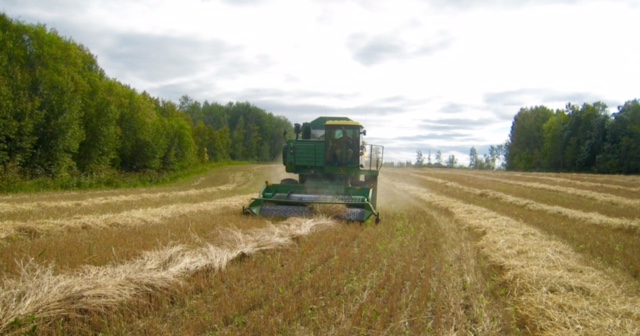 This trend in organic farming is also shown by Agriculture Canada, while the total number of farms in Canada decreased by 17% between 2001 and 2011, the national number of organic farms increased by 66%.
Posted by Here and There No comments:

50 years ago this fall, I took some pictures of my Dad’s harvest.  I was home for  the Thanksgiving weekend and took a few pictures of the farm.  I was living in a nursing residence in Winnipeg, and I was lonely for my family and the farm. 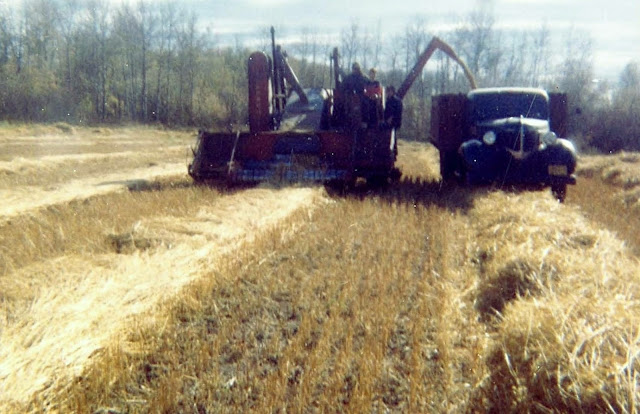 Little did I know this would be my Dad’s last harvest.  My Dad died the following May resulting from a farming accident; catching his fingers in the Auger Hopper and only treated with antibiotics by the local doctor.  My father as many at that time were not vaccinated for tetanus.  Yes, every time, I hear the arguments for not vaccinating children, I shutter to think of the preventable violent death my Dad experienced because of not being vaccinated.  Of note, when attending a lecture by an intern at the General Hospital in 1992,  a staggering number of middle-age farmers at that time had not been vaccinated.  A suggestion had been made that all patients should be asked on admission if they had been vaccinated. 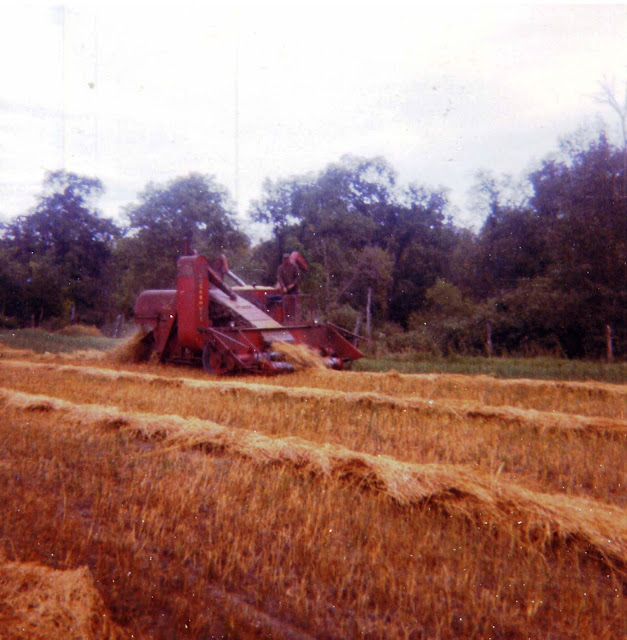 Looking at the picture taken 50th years ago, many wonderful memories of farm life come to mind.

However, after the shocking accident in Alberta when three girls playing on a loaded truck of Canola, became buried and smothered by the seed in the truck, brings to mind the dangers of farming.  From 1990 to 2008, in Canada, there has been close to two thousand deaths, with 248 being children.

For all the changes that have happened in the last 50 years in farming, farmers are still putting in very long hours, working from dawn to dusk, putting self into risk, yet accepting the risks as part of farming!

The question to be ask is what is being done to address the dangers in Farming.

No Knead bread has been around for a few years, but this takes it a step further.  You can keep fresh dough in a vented tupperware container for over 2 weeks.  Previously, I had been freezing the leftover dough, especially when making the whole recipe using 10 cups of flour for Easter bread.  The dough then had to be thawed out before being formed into bread loaves or rolls.

This dough can be formed into rolls, loaves, but since I have been thrilled with the pizzas that are baked in a Cast Iron skillet on the BBQ, I have only used this dough for pizza.

The 14 inches rectangular Cast Iron skillet has been my favourite for making pizza and having leftover for cold pizza in the morning, my husband's favourite. 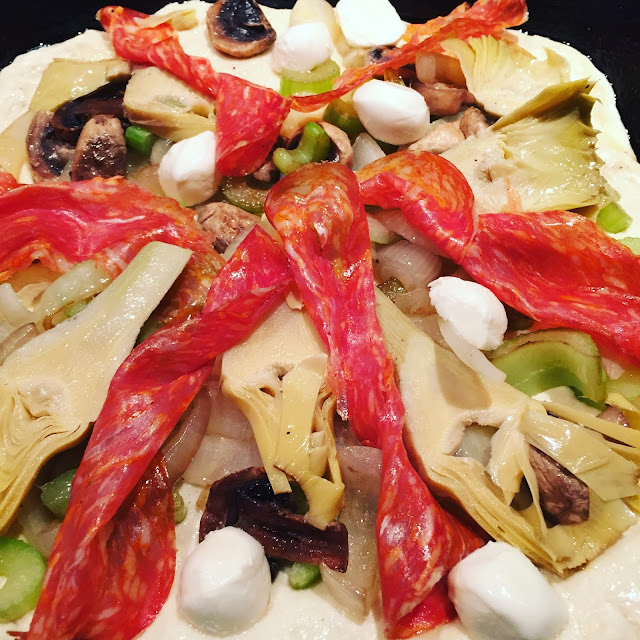 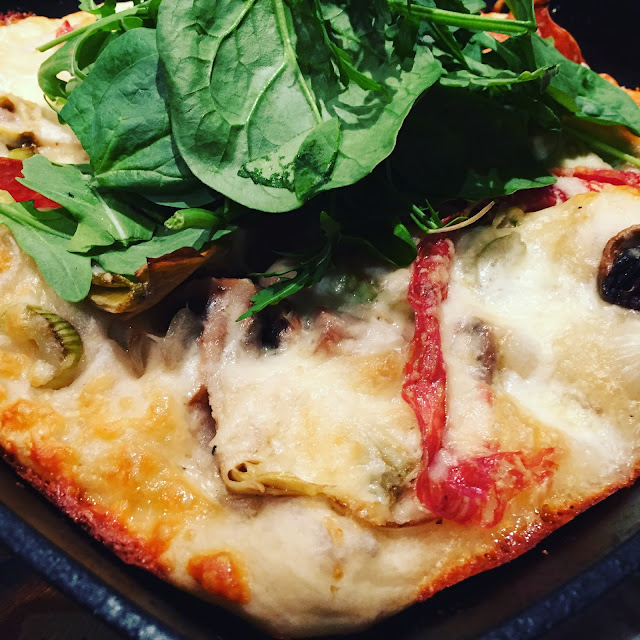 I started making bread when first married and my first bread was made with whole wheat flour and seeds.  So healthy, it literally was the weight and density of a hockey puck.  It did make great chicken stuffing! When relating this story to my Aunt Mary, she also remembered her first bread making experience and her opening the kitchen door and throwing it out to the dogs to eat. We both had a good laugh!

I remember my Mom made 6 loaves at a time and how my father enjoyed this white bread especially the crust!  She would mix the dough up in an white enamel pan and knead it only long enough for the dough to come together and always in this pan.  I learned very quickly that you did not have to knead the bread for ever as I did not have the strength in my wrist to do this for the 10 to 13 minutes required!

The first time I made the no knead bread, I can't say I did the beautiful crusty bread with all the holes in the bread, nor did it taste remarkable.

But I must say the pizzas done in a cast iron on the BBQ are crusty and delicious.

At first, I did pre-bake the pizza dough as I do when baking the pizza in the oven but it is not necessary when BBQing. The pizzas are baked in indirect heat in a very hot BBQ.

Here is my modified Refrigerator no Knead Dough

The original recipes calls for 6 1/2 cups of flour, but since I want to mix it with a spoon, I could only mix in 6 cups. One could use the mixer to do this but I mix everything in my tupperware container. 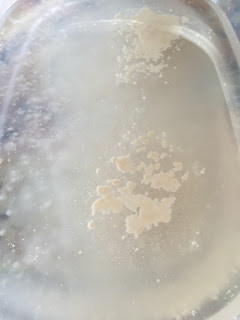 Since I use the old fashion yeast, the yeast needs to be proofed in the water or it will not dissolve properly and you will have crunchy texture in your dough! 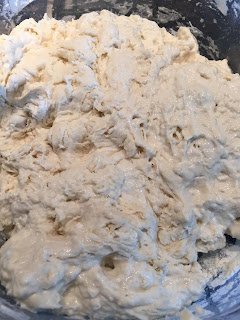 Not the best mixing, but trust me, this dough that is lumpy will relax 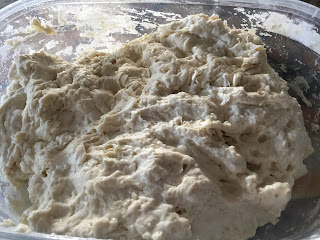 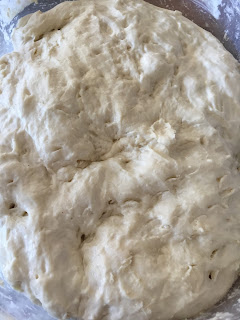 After 3 hours, there was some activity as the enzymes in the flour have broken down some of the proteins, causing the dough to slacken and spread. 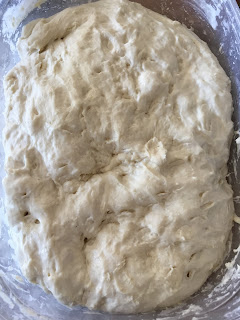 The mixture is then refrigerated in a vented container!  Make sure your container is large enough, as the dough does rise in the refrigerator. 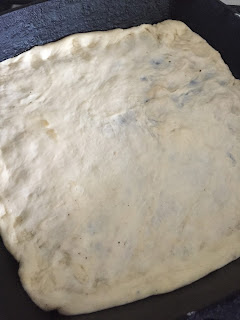 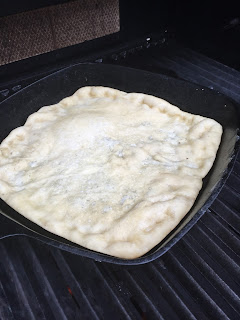 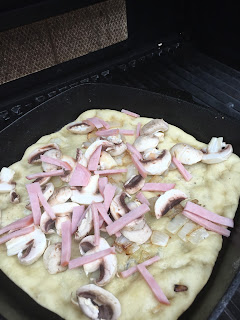 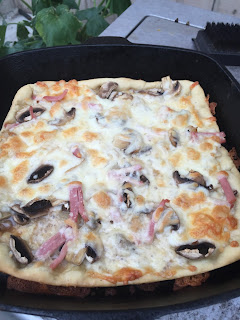 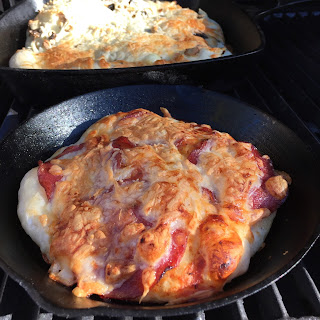 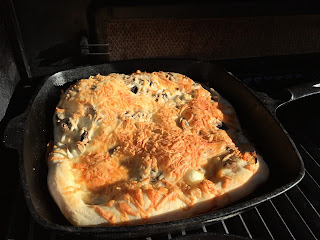 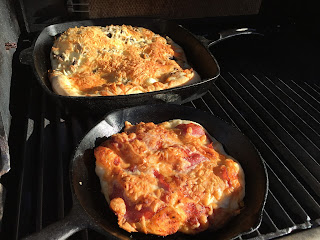 Maybe it's my life stage, but after yesterday reception for my daughter's friend's father, I have been thinking about sandwiches and funerals!


I am not a big fan of sandwiches and for the reception after my mom's funeral in 2003, I had requested assorted salads along with trays of assorted cheeses, sliced meat and buns.  This did cause some concern with the ladies in the church as they would assign different sandwiches to be made by the ladies.  Sandwiches such as egg salad, ham and cheese, salmon salad and chicken salad sandwiches. Yes, a lot of mayo went into these sandwiches, not to mention the work especially to the women assigned egg salad sandwiches..   I did convince the ladies that it would be very hot day in early September and that salads would be greatly appreciated and easier to make.  Salads like Caesar, coleslaw and Spinach salad.  Two other salads were also made by the ladies, pasta and potatoes salad.  Despite the resistance, I understand that this suggestion is now being used for other funeral with great success.

Yesterday, trays of a variety of sandwiches were beautiful presented. The sandwiches were cut into triangles and arranged in long lines on trays, pushed together to prevent drying of the crusts.

As I reflected on sandwiches at funerals, I also thought greatly about the message in the last two funerals I have attended.  What message would I want those at the reception to walk away with?


Posted by Here and There No comments: