Bonnie Stern in the article below from The Regina Leader Post on Saturday, May 24, 1980 writes that Canadian Food is something French Canadian. 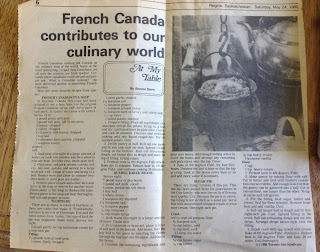 Using the Quebec Baked Bean recipe in the above article, with some modifications, we baked great northern white bean casserole at 275 degrees for over 8 hours. 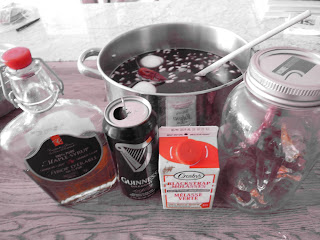 Maple Syrup from Quebec, Crosby's Molasses from New Brunswick, Manitoba Organic Hot red chilies from our family farm! And a Can of Guinness!

The recipe called for leaving the onion whole, but with baking, the onion fall apart and would have looked much better diced. 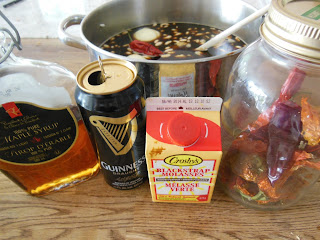 The smell of this dish baking most of the day was most mouth watering! The results were a thick dark colored baked bean! I had added one hot red chilli, but could have used more heat! I also had doubled the amount of maple syrup and Molasses, but could have used 1/3 of a cup less of sweetness. 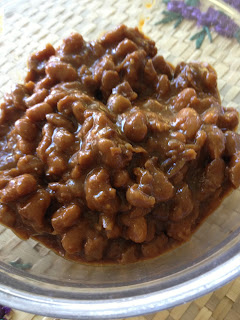 Talk about a dark and rich colour 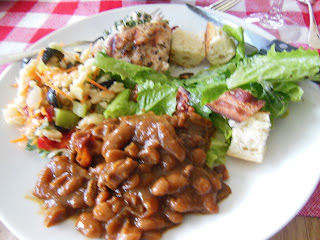 Baked Beans were part of the Sunday meal! 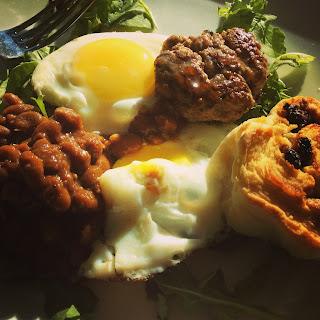 And breakfast of Champions today!
Posted by Here and There

Thank you so much, I have looked at 20 sites, none of them where original baked beans from Quebec...So happy too that you had the newspaper 1980, with tourtiere, my mother in law use to make. Cloves and bay leaf will be great, other receipts where chili, ginger, and weird stuff. I have an allergy to tomatoes and this is so wonderful. Thank you, thank you, and thank you again.

Noteable PainPeak.. you are welcome! The Bake Bean recipe is very tasty.. but my husband does add beer to it! Never thought that the unique taste is due to the lack of tomatoes in the recipe!
Is this the actual recipe your Mom used to Make Tourtiere?