The Canadian Food Experience Project was launched on June 7, 2013 by Valerie Lugonja to explore the essence of Canadian cuisine with participants across Canada as they share their regional food experiences.

I was born in Manitoba, in the Parklands and have fond memories of growing up on a Hereford cattle mixed farm. I have lived across Canada; Winnipeg, Montreal, Regina and now live In Calgary.  Every place has its charm and I loved living in each of the cities in Canada.
I have been blogging off and on, mainly trying to develop a personal style that appeals to me...  I went from being a food critic to now blogging on my personal life and recipes that have evolved as I prepare them.  I also am  trying to master dishes of my Mom’s that I refused to eat as a child!  My thoughts as a child were who eats dough and cheese? Disgusting!  Yet, My Irish Maritimer husband and children love pyrohy!
My Mom at an early age had worked in a hospital setting under a trained chef.  Her knowledge of food preparation such as sauces, custards, pastry and desserts are legendary!  Rarely were her recipes in writing and if they were they lacked a name or the method.  Much like the very early edition of “The Mennonite Treasury of Recipes” where method often was lacking as it was a given, one just knew how to use the ingredients once they were listed!
I am most interested in the similarity of food preparation between cultures.  Most recently on our trip to Jamaica, the recipe given to me by a chef for Browned Fish, was very similar to my Mom’s preparation of fresh water fish such as pickerel and jack fish, of course minus all the seasoning.  Certainly Canadian cuisine is constantly incorporating other foods as it’s own other ethnic groups foods yet basic food preparation is at times very similar.

My first food memory was as a preteen when my Dad had hunted three prairie chickens and brought them for me to prepare for supper.  My Mom was in hospital after giving birth to my brother and the task of  preparing these prairie chickens was left to me.   I remember staring at them wondering what I would do with them.  I remembered Mom pouring hot water on our farm chickens before plucking the feathers, which I did.   As I tried to pluck the feathers  much to my surprise all the skin of the chickens came off!   The rest of my food memory is vague, but I do remember my Dad's smile, which I think was for a job well done!

My father was always reading recipes in the Manitoba Cooperator paper, a weekly rural paper and getting my mom to prepare the recipe.   One such recipe was Cornish Pasty.  These we enjoyed hot out of the oven as we listened to Saturday Night Hockey on the radio!

After reading about Maple Syrup season in Quebec, the next spring Dad tapped one of the Manitoba Maples on the farm.  With much excitement, the gallon pail was placed on a wood stove to reduce.  After many hours of carefully watching this process, the result was about a cup of syrup, which was not very sweet.  Needless to say my father did not do this again! 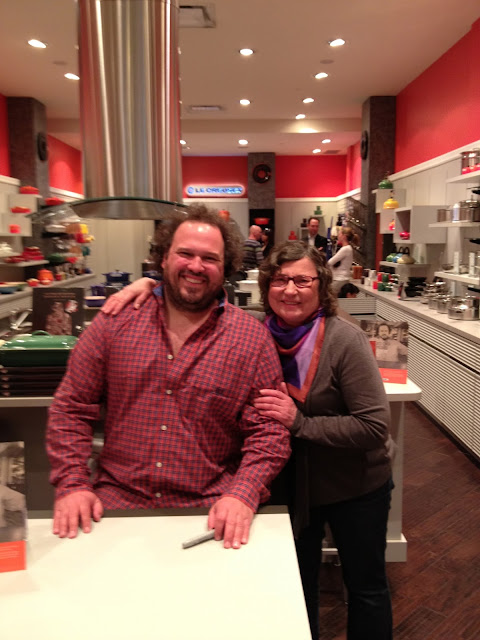 Last year, I had the good fortune of meeting Chef Martin Picard and in relating the Manitoba Maple syrup story to him at coffee, I was surprised at his interest and to have him quickly calculate the amount of sugar water from Manitoba Maples it would take to get a liter of syrup!

I am excited to be part of this project. I believe that Home Cooking and Baking is taking a back seat to the packaged and processed foods as these products take over our supermarkets! There are fewer and fewer space over the years allotted to one ingredient products in our supermarkets  and even our farmer’s markets are being affected! Home cooking needs to be back in the forefront so that further generations enjoy the tastes, smells, textures and just pure joy of creating a recipe from scratch or mastering a family traditional recipe.
My Mom has been remembered for her culinary skills by her grandchildren.  I too want to be remember by my grandchildren as having a kitchen full  of great smells and delicious food!

Totally enjoyed your reminiscing. You got me going with the Prairie Chickens... and Hockey Night in Canada. That was torture for me as a child. One TV. Saturday Night. Hockey. YUCK!
Cannot imagine being a young gal having to take the feathers off of a bird. What a poignant memory.
:)
V

I too am making it a goal to do as much fresh ingredient cooking as possible. I very rarely use prepackage ingredients and try to use the freshest ingredients that I can find.

Great post. I also remember the prairie chickens and have lived in the city for a long time and didn't realize they are disappearing. I'll have to read your post on that, too. I hear you, Val, regarding Hockey Night in Canada! I hated Saturday nights because we always had to watch hockey. But then, we only had one channel on our tv so there were no other choices.